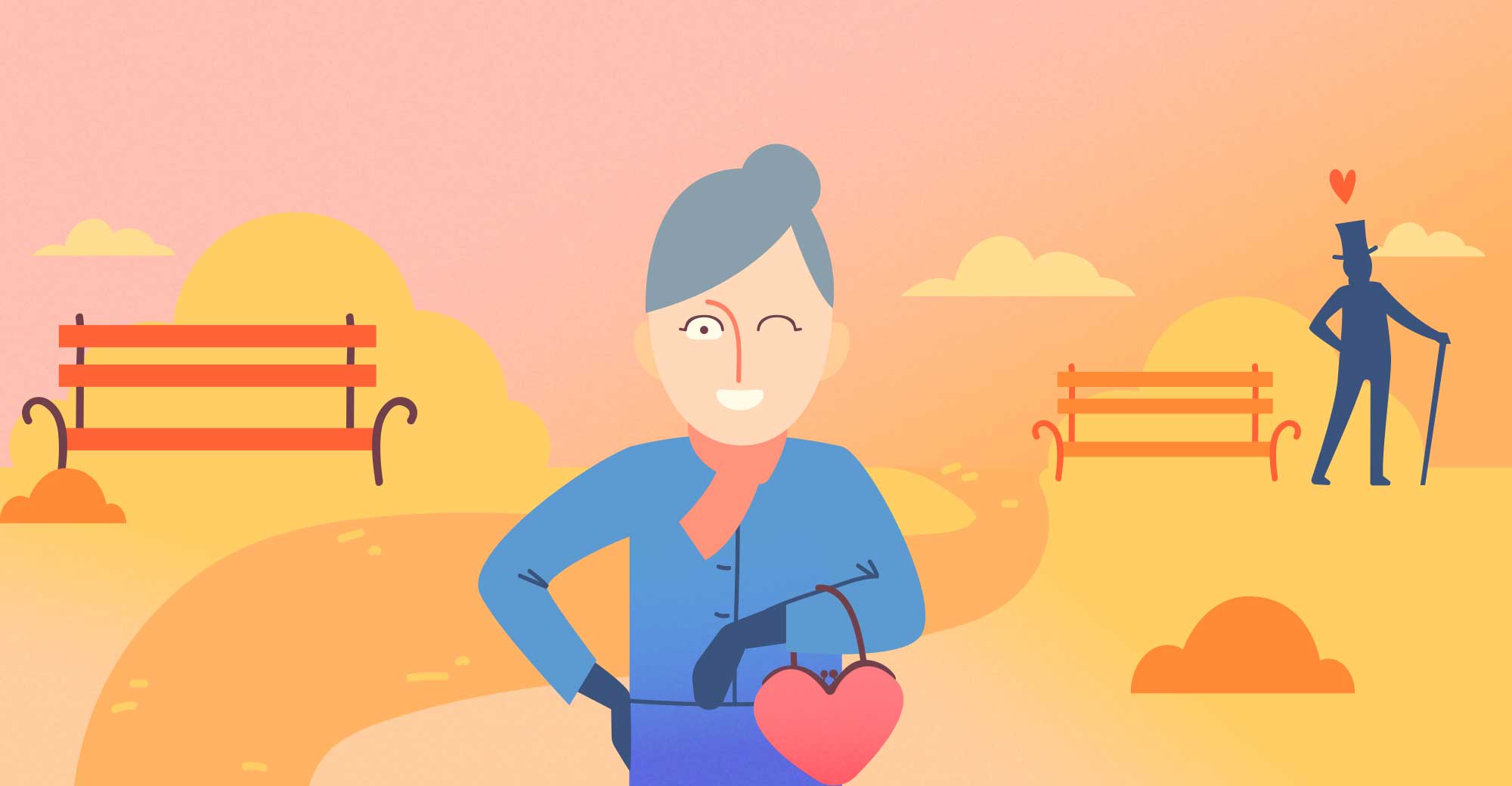 It seems only befitting that I am writing this article from a vintage, velvet red couch in a cozy French-style cafe being serenaded by a soothing jazzy female voice cooing about love. What a perfect scene to explore long-lasting romance from.

On second thought, I have learned that it doesn't really matter where I am or what mood I am in. Inspiration is everywhere.

Over the years, I have cultivated a healthy obsession with finding people or situations that challenge the status quo. People that surpass expectations and significantly uplevel the quality of their lives. I actually never have to look far. I just have to be open to possibilities and have an inkling of where to look.

In the course of my professional career, I have had the privilege of working with thousands of couples over the age of 65. I have seen all different flavors of marital interactions ranging from two people who can't even be in the same room as each other to those couples who after decades, still call each other sweetheart, hold hands, and speak to one another with nothing but respect.

When I see couples that are particularly happy I always ask, “What's the secret?” I get all kinds of answers. Mostly, folks can't really put their finger on it. Every now and again, I get the answer “Marry the right one” or “It's easy. Just do what she says.”

But in all seriousness, the fundamentals behind happy, inspiring, and long-lasting relationships are incredibly simple.

This article is dedicated to one case study in particular that struck the biggest chord with me.

I was at a professional coaching training in Virginia in April 2016. The trainer was a psychologist named Dicken Bettinger.

Dr. Bettinger began the workshop with a discussion of his relationship with his wife Coizie. He spoke about how frequently he falls in love with her all over again, even after nearly 50 years of being together. A smile entered his face and a tear came to his eye as he recounted a time recently when he was overcome with love for Coizie and stated: “I just looked at her and thought you are just so cute.”

I was deeply touched by how genuine he was about his affections for his wife. It is the kind of radiant joy that can not be faked.

For years, I myself had no intention of getting married. I lived for the infatuation stage of relationships. I was happy to be traveling the world alone as an “independent woman.” However, these long-held beliefs had recently been shattered when I met Eemeli (my now fiance) while living in Spain two months earlier.

The timing of Dr. Bettinger's talk was impeccable.

The deepest part of me acknowledged the truth of what Dr. Bettinger was saying, especially when he went on to say something along the lines of…you know the psychological stages of love are not true right?

Now I am not bashing psychology. I studied psychology myself. It is a field of inquiry that has helped many people. However, many psychological theories are just that…theory. They are based on correlation, not causation.

Here are some words from Dr. Bettinger regarding his nearly 50 year relationship that blows any and all psychological theories and techniques out of the water.

“My wife, Coizie, and I have been married for 48 years. We met our sophomore year in university and we got married the summer that we graduated. I was 22 yrs. old and Coizie was 21.

Right from the beginning of our relationship we never thought it was helpful to dump our upset onto each other. We learned very quickly to wait until we felt better before having heart to heart talks.

These talks just brought us closer. We also liked to problem solve together, so if we had differences we enjoyed brainstorming together to find new solutions that we both thought were great.”

What Dr. Bettinger is sharing here…the importance of not blaming the other person for our own upset, in and of itself is uncommon in the world of romantic relationships and would likely result in many saved marriages.

But in the spirit of inspiration, let's see what took Dicken and Coizie's relationship from good to great.

“Then in 1986 I met a man named Sydney Banks, an ordinary man who had had an enlightenment experience. One of the things that I learned from Syd was that each of us lives in the world of thought from the cradle to the grave.

This notion that we are always only feeling our own thinking and nothing else in the world has the power to create our feelings was revolutionary for Coizie and me and our two children.”

I know. This may not seem like that earth-shattering of a revolution or you may not believe that the building blocks of human experience could be this simple. But, I invite you to stop and take a breathe. Let your intention for an inspired life guide you and allow yourself to drop what you think you know and get curious, just for few more moments.

What is most intriguing is that when Dr. Bettinger speaks and teaches about thought, he is not talking about it in the same way as many others do in the fields of personal development or psychology.

Dr. Bettinger talks about thought as a universal principle.

So, he is not talking about a specific kind of thought or thinking. He isn't suggesting that people try to change, control, or reframe their thinking. He is not even encouraging positive thinking or asking people to ask themselves: “Is this thought true?”

He is putting attention on this notion:

Seeing deeply that it is not what we think. Rather that we think that has the power to burst entire belief systems at once, permanently transforming our lives and our relationships.

This definition of thought is much broader. It is highlighting the human capacity for not only conscious and unconscious thought, but also sensation. Dr. Bettinger is talking about the fact that every human being uses the principle of thought as a catalyst to convert formless energy into tangible experiences (ie. thoughts, feelings, sensations) in the body.

Again in theory, this seems like no big deal or may even sound too woo-woo for you. But, when someone experiences a sense of transformative learning around this principle, his or her life and relationships have the tendency to transform.

Let's see what the implications were for Dicken and Coizie's relationship…

“We began to take full ownership of our feelings rather than blame them on each other.

Seeing that our upset was just our own thinking in the moment allowed us to drop away so much upsetting thinking. We would get over our upset more and more quickly without blaming each other.

And as our heads would clear, we would always feel better and get new thinking that was helpful and creative.

Understanding the power of thought became the key that unlocked our natural capacity for love and understanding.”

What is revolutionary here is the notion that a state of love and connection is what naturally exists when we are not under the spell of mistaking our biased and personal thoughts for objective truth.

Often when I speak to couples or therapists, they believe love and relationships are fundamentally hard work and require constant sacrifice and compromise. But is that really true? Or is it a self-fulling prophecy?

Again, both Dicken and Coizie point to a different potential for relationships.

When I asked Coizie, “What is the reason why your relationship with Dicken has lasted nearly 50 years?” she responded with certainty and simplicity.

“Two things really jump out for me in thinking of why our relationship has lasted so long.

First, we have learned not to take each others’ moods (ie. states of mind / habitual thinking) personally. Period.

That makes an enormous difference.

Second, to take responsibility for our own thinking, rather than to blame it on the other person.

When we do both of these things we are left with the love that is always there.

And we are left with the loving feelings that let us help each other, enjoy each other, share with each other, and allow the other to go through their own levels of thinking. It works.”

As Dicken and Coizie began to put more attention on their natural capacity for love and connection and less importance on their unhelpful opinions and judgements about the other, they began to enjoy a life ripe with good feelings, inspiration, and unconditional love. They could relax into being with one another without their insecure feelings such as fear, worry, jealousy, anger, righteousness, or disappointment taking control for very long.

“Be unconditionally giving away our love to each other we continued to come back to the state of being in love with each other.

Our upsets became natural thought storms that would come and go quickly. As the thought clouds passed the inner light would shine through bringing the warmth of caring and the gift of new and helpful thoughts. For me, understanding the nature of thought became the most important key to maintaining my love for Coizie.”

In closing Coizie told me, “We love each other as much as 50 years ago when we met, but with more understanding.”

[Challenge] Create an intention. Re-read this article. Print it even. Then, give yourself at least 15 minutes to write down and explore the themes of this article in your own words. What new things can you discover about living an inspired life or cultivating inspired relationships?

In closing, I will leave you with a few inspirational stanzas from Frank Sinatra since his voice just came over the loudspeaker…

It can happen to you if you're young at heart

For it's hard, you will find

To be narrow of mind if you're young at heart

You can go to extremes with impossible schemes

You can laugh when your dreams fall apart at the seams

And life gets more exciting with each passing day

And love is either in your heart or on it's way

(Read this next: The 1 Lesson Every Parent Can Learn from Their Kids)

✨ bring the inspiration to your inbox 💌

Understanding so much and will definitely make a conscious effort to be aware of my thought’s and how they can impact on my relationship and steer the course of understanding as much as I can take responsibility. Linda.

Thank you so much for this article.

Beautiful and much needed!

Wow. This was just an amazing read. Thank you so much!

I agree with this. For me, knowing where my thoughts are is so important. Making a choice on what I choose to focus my thoughts on is intentional. Just that act allows me responsibility to choose to be in fear or in peace. Where are you living?

Thanks Amy, a love(r)ly article! I’m of Finnish background too, like your Fiance.